During our harbour tours, Hamburg´s Port will be presented to you from it´s most beautiful side. Experience the docks, container-terminals and oversea-ships. You will as well be shown the warehouse-district (a World Heritage Site). Our boats will be exclusively available for you as a group.

Depending upon the water-level the Tour starts in the Speicherstadt and lead´s from here throught the river Elbe towards the Freeport and it´s world-famous attractions. 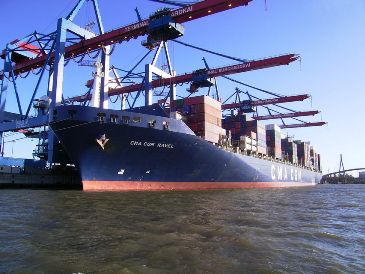 Thes include – in addition to Docks, quays and oversea ships – the St. Pauli Landing bridges, BLOHM and VOSS Shipyard, the container terminal »Tollerort«, the World Heritage Site of the »Speicherstadt«, the cruise center in the HafenCity, the large and small museum ships, including the newly emerging HafenCity.

The tour also leads to the Harbour-Museum in »Hansahafen«. There you can see how work in the port is beeing executed. At the historic fifties shed you can admire beautiful old cranes, also facilities of the port railway and some museum ships. The modern giants of the seas, container ships with up to 20,000 TEU, can be seen at the »Tollerort« and in the »Waltershofer Hafen«.

During the (mini)-cruise, you can hear and see how the Port of Hamburg is developing, but also some first-hand sea yarn. Like the humor at our rides should not be neglected at all. 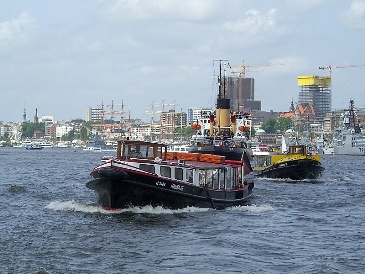 The »Speicherstadt« was built at the end of the 19th and the beginning of the 20th century. Traversed by narrow waterways, the area is now part of the World Heritage of the United Nations. It is one of the main attractions for tourists from all over the world.

The old warehouses are built on oak posts. There are waterways on all sides. In this historic warehouse district they are called »Fleets«. These are – depending on the tide – flooded by the Elbe, so that they can only be accessed by small boats.

Such a canal tour is an unforgettable experience. At nightfall, the Speicherstadt is also surrounded by a mysterious aura. Then the brick buildings and steel bridges are artfully illuminated.

The futuristic HafenCity project is being built right next to the Speicherstadt. You will not only be fascinated by the Elbe Philharmonic Hall!

Here you have the possibility to book whole barges or passenger-boats exclusively for your Group! Our private harbour Tours are starting at the Pier »Kajen« directly located at the »Speicherstadt«.
All prices include an English-speaking Tour Guide!

The prices mentioned above refer to historic harbour barges, offering a capacity up to 60 persons. If larger ships are required, feel free to send us a message.